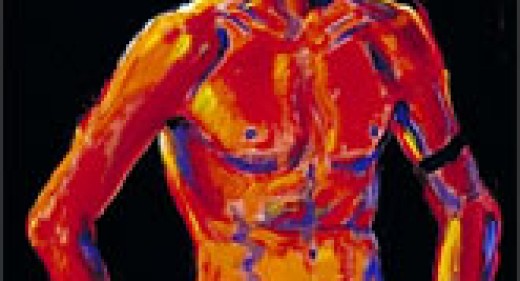 There’s a painting on the wall of Gary Hall’s eye surgery clinic in central Phoenix. It’s a picture of his 21-year-old son Gary Hall Jr., the recent winner of two gold medals and two silver in the Olympic Games in Atlanta. The painting by Steve Voita shows Hall Jr. wearing his U.S. swimming team cap and cool sunglasses. His hands are on his hip in a menacing, just-try-and-beat-me pose. What his father notices most, though, is the mouth’s pout.

“When you see that bottom lip corning out,” his father says, “you know that he is going to go for it. He’s got that kind of stubborn streak. When I saw that look when he got in the starting blocks (before the men’s 4X 100-meter medley relay and the 4X 100-meter freestyle relay), I knew it was over.

One other thing you’ll notice about the painting: the bright colors. How would you feel if your odd-ball son inspired an artist to use such super hot images of bright reds, oranges and royal blues? He’s a flaming streak. A shooting star. And a strange one, at that.

From the Arizona Republic — Muhammad Ali may not be able to float or sting anymore, but he still can draw a crowd. Fight Night III, an event that netted $500,000 – some of it going to Parkinson’s research – attracted almost 500 people to tables that went for the high prices of $3,500 to $6,500.

The champ posed for pictures (supposedly $1,000 each), made a few boxing moves and climbed into the ring a couple of limes during the event. The main attraction is celebrity boxing with hugely oversized gloves, but without a personality like Charles Barkley, the fights were a dud.

The real competition was during the auction of an oil portrait of Ali painted by Steve Voita. Jerry Colangelo dropped out of the bidding at around $30,000, and the painting ultimately sold for $75,000; Voita agreed to paint a replica for the same price for the losing bidder. 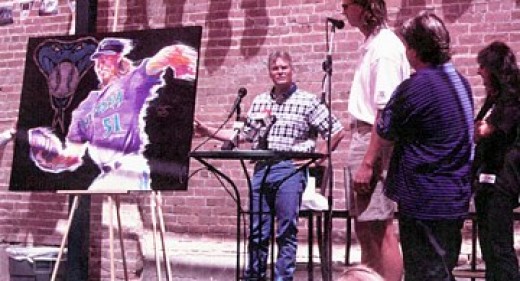